A couple of weeks ago Bobbie took me mountain biking with some of her friends, which as it turns out, were some of my friends. It seems we know a lot of the same people. I had a mountain bike, but it was more of a general purpose beast that was intended for hauling groceries as much as hauling through single tracks. Before the ride I put the knobby tires back on and took off the fenders and rack. It performed admirably but I was still hard pressed to keep up with everyone else.

I really enjoyed myself, so that night I went down to Arron's Bicycle Repair and asked Mikey what kind of bike I should get. After looking through a catalog, he advised me to get a Rize 4. This is not the top of the line Rize, but Mikey advised against getting that because the Lefty fork is rather difficult to service and requires special hubs. So, I went ahead and ordered a Rize 4. Two weeks later, after a trip back for fitting, I picked up my brand new bike. The next day, Bobbie and I went out to Green Mountain to try it out. The ride consisted of a six mile climb to the top of the mountain and a six mile descent back down. Simple enough, right? Well, not quite. After the first half mile, I was really sweating. After the first mile, I was just plain dead. I couldn't keep the front wheel on the ground without an enormous amount of effort and my legs felt like rubber. I couldn't understand what was wrong with me. Bobbie was very supportive, giggling as I trudged up to the fire road to meet her. We rested for about fifteen minutes and then I was ready to try some more. After a few hundred yards, I was out of breath again and quite alone. Bobbie wasn't about to wait around for me. Somewhere along the way, as I was trying to go up over some rocks, the front wheel came off the ground and sent me onto my back. If I hadn't been wearing a Camelback, I might have been in real trouble. The water filled bladder cushioned my fall and I just bumped my elbow a little. After taking a few minutes to recover, I got back on the bike. It was on an incline already, but as I got on I felt the back end sag down and that's when it hit me. "I sure wish I could stiffen up this suspension" I thought to myself. That's when I remembered the little lever just under the rear suspension that makes it stiffer (I later learned it's called "Pro Pedal"). I flipped the lever and suddenly the climb seemed a lot easier. I was still rather worn out, but I managed to keep up for the rest of the ride. By the time we got to the top of the mountain, my bike was pretty well broken in. 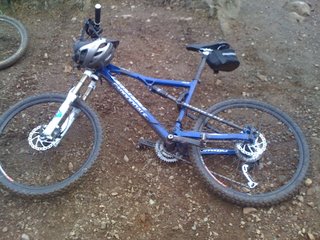 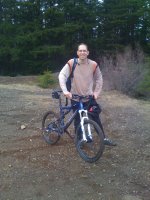 I was having a good time and the view from the top was pretty amazing as well. We could just make out the buildings in downtown Seattle from across the water. In between us and Seattle was Bainbridge Island, where the Chilly Hilly and FHR were going on. This was the ride that I had so badly injured myself on just two years earlier. I thought about how, having conquered it last year, I was now in search of new and better ways to get hurt. At least if I got hurt today, two thousand other people wouldn't have to see it.

The way down was a little easier, but I made sure to play it safe. Even so, there was only one or two areas that I felt compelled to walk down. The bike handled quite well and after I got down to the trailhead, I told Bobbie I wanted to try it again soon. She couldn't believe that I would come back for more abuse but, I think now that I'm a little more experienced, it should be a little easier. Just a little.