We had wanted to ride the Haleakala (Holly-ah-kuh-lah) volcano but since we had no rental car, the logistics of getting there proved to be unworkable. Later, we found out that due to low tourist expectations, a great number of rental cars had been shipped off the island, making them scarce.

Instead, we decided to take a ride along the scenic Hana Highway to Twin Falls. The ride was a little slow getting there but we came across some other cyclists preparing for a triathlon. We spent some time in their pace line, making the miles fly by quickly. When they decided to turn around, we were fairly close to our destination. 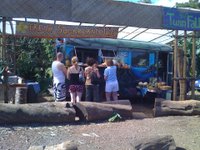 The heat of the day soon took it's toll and we arrived hot and tired. Fortunately, there was a fruit stand there and we were able to get some banana bread and sugar cane juice. We had to wait in line while the lady running the stand hand cranked the press to squeeze the juice out of the sugar cane. The stuff was absolutely delicious. I expected it to be a lot sweeter than it was, so I guess unrefined sugar cane really isn't super sweet.

After resting for a few minutes we began our trek down to the falls. We were a little apprehensive about making the one mile walk in our cycling shoes but it turned out to be quite manageable. When we arrived at the falls, we had to walk along a narrow wall that had been built up to direct the flow of the river. Then we had to wade through a knee deep pond to get to the falls. The area was rather rocky, so Bobbie decided to keep her shoes on. I didn't want to ride back in soggy shoes so I took mine off. She tried to convince me to keep them on due to her extensive experience with this sort of thing when mountain biking. I wouldn't listen, so I waded into the water bare foot. After about ten feet of painful progress, I was forced to backtrack and admit that she was right. For anyone paying attention, this will be a recurring theme in future posts.

As we were walking across the pond, I saw another man trying to do the same thing I had just done. He grimaced with each step as he waded further and further out. Just after the point that I had made it to, he hit an exceptionally painful rock and stumbled. His cell phone and camera both took a dunk. He should have learned from my mistake, but who am I to judge?

We finally made it to the falls where we watched for a few minutes as people swung from a rope into the water. After watching for a while, I decided I had to do it. I took off all of the items that I didn't want to get wet climbed onto the rock and grabbed the rope. I swung out over the water and let go. It was cold and refreshing. I did it again and then convinced Bobbie to do it. We then headed back to the bikes that we had left near the entrance. By the time we made it back, I think we both were ready for another swim. Fortunately, we had a very strong tailwind on the way back and we averaged well over 20mph all the way back. As we came back into Kihei, Bobbie said "I could really go for a cheeseburger". Right at that point, I decided that this was going to be a long and wonderful relationship. We found a sports bar and enjoyed delicious cheeseburgers as we watched the Steelers make it to the Superbowl. We got back to the hotel, took a nap and broke down the bikes for the trip home the next day.

Monday morning, we got up bright and early for our snorkeling tour. We had waited until the last day and it ended up being perfect. It was clear, calm and cool. For me, it was perfect. For Bobbie it was a little too cold. I really hadn't been snorkeling before, so I was rather apprehensive about that. When I got into the water, it went well for a few minutes until I swam up next to Bobbie. 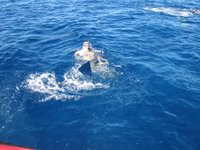 All of a sudden I got a mouth full of sea water and things went downhill from there. No matter what I tried, I just couldn't clear my snorkel. Finally, I ended up treading water, trying desperately not to put me feet down on the delicate reef. They called me back to the boat and gave me a noodle and a new snorkel. The new snorkel was better and had a lockout valve. After a few minutes with it, I no longer needed the noodle. I swam around for a while longer until it was time to leave the reef.

We then headed out to see some turtles. The sea turtles are endangered, so we were given a stern warning that if we got within five feet of them, we could be fined $5,000. We jumped back in the water and were immediately in the middle of a group of turtles swimming deep beneath us. Bobbie was cold and stayed on the boat. I was much more comfortable in the water and dove down a few times to listen to the whales. Even though we couldn't see them, we could hear their deep moans. After about 15 minutes with the turtles, we got back in the boat and headed to shore. As we got close to shore, our guide held out a piece of muffin in her hand. Within seconds she was mobbed by birds, landing on her arm and hand to get at the tasty morsel. She then sent around the muffin tray and we all tried our hand at feeding the birds. It was difficult to hold onto the muffin, but I did get a few to land on my fingers.

We made it back to shore with plenty of time to spare before our flight. We went back to the hotel room, showered, checked out and caught a cab to the airport. Leaving Hawaii, there are two sets of checkpoints to go through. One is Hawaii agriculture, which checks for outgoing fruits and vegetables. The other is standard security. The Maui airport is pretty small so neither was much of a problem. We boarded the airplane and headed home. Even though the plane was an hour late, we managed to make our connecting flight along with our luggage. I guess, since both flights were the same operator, United, they had some incentive to make sure our baggage made it on the plane with us. We got back into Seattle at 1am and headed back to our respective houses. We both had to go to work in the morning but, after all of the things I had done on our trip, work seemed like a great place to get some rest.

For all the pictures, visit the slide show.