Jumping the Shark - outside the realm of popular culture, representing anything that has reached its peak and has declined in quality.

Maybe it's turning 38, maybe it's just a hot summer but lately I've grown tired of riding to work. I have very little energy after I get home, I spend at least an hour eating at night and I have little time to do anything during the week. For the past few months, I've been toying with the idea of getting an electric hybrid bicycle but last Friday, I made up my mind. It was a hotter than usual day and the ride home on my heavy Dutch city bike was miserable. By the time I got home I decided I needed a change. On Saturday, Coleen and I went down to Electric Bikes Northwest and I took a look at what they had.

Although I had ridden an electric bike before, I had never done it on the road. I was quite 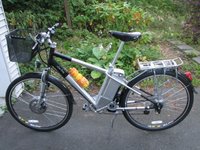 impressed with the speed and I decided on the eZee Torq. None of the bikes there were exactly what I wanted, but that one was the closest and I figured I would upgrade it as necessary. The bike weighs about 60lbs, which is very heavy for a bike but still less than my Dutch bike's 70lbs. On a level surface under full battery assist and my pedaling at a comfortable effort, it goes about 22mph. The motor, by law, cannot assist to speeds over 20mph. That means that only the rider can provide power to go over 20mph.
I rode it home from Ballard, which was about 13 miles, and included the route I take home from work. The first part of the route was fairly flat but after the Fremont bridge, there was a decent hill. Normally, I can power up that particular hill at 10-14mph depending on the bike and how hard I want to ride. With the Torq under full assist, I was doing 16mph with little effort. I noted the time as I passed my office so I could compare the time it took me to get home with my normal ride home. I hit downtown and encountered complete mayhem and congestion as a Mariners game let out. Even with that, I still got home in 32 minutes and despite the above average heat, I was only sweating as much as I would have been if I had been working in the yard. Had I been riding a regular bike, I would have been drenched.
The next day I went down to my local bike shop, Aaron's Bicycle Repair, to get some much needed upgrades. The first one, was a new seat and seat post. The Torq comes with is a "suspension seat post" that has a built in shock absorber. I haven't had any prior experience with these, so I can't conclusively say they're all junk, but this one was terrible. The only redeeming value it had was a flip-up hinge to allow the seat to move out of the way for battery removal. At the height that I have the seat at, this is not necessary and even if it were, the quick release seat post could be removed. The standard gel seat also had to go and I replaced it with a Brooks leather saddle. Then, I added a basket and a double kickstand. I've found baskets to be almost necessary to any utility bike but a basket doesn't work very well unless the bike has a center stand to keep the bike vertical when it's being loaded and/or a spring attached to the forks to keep the front wheel straight (my Dutch bike has both). The Torq doesn't lend itself to having a spring but because of the heavy front wheel, the center stand works nicely. 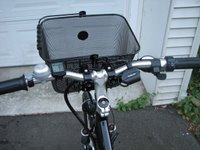 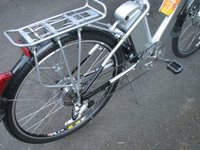 My biggest complaint with the bike is the control layout. Apparently, nobody at eZee realizes that the average person has no fewer than two hands. The power switch for the motor is mounted on the throttle and gets in the way of shifting. The switch has sharp edges that can be very irritating if you rub against it when shifting. At first, I tried moving the throttle position, but the cable was rather unsightly. In the end, I decided that extra care when shifting was justified by the cleaner look of the normal switch position. All that it would take to change this would be to get a left handed shifter, a left handed throttle or a throttle minus the power switch. The other nuisance is the rather jerky braking. It seems to be coming from the front disc brake and could probably be fixed with a better brake.
It doesn't surprise me that electric bikes have no shortage of cheap parts. Bikes like these are all but shunned by serious riders and anyone else would be hesitant to even spend the $2,000 that the average electric bike costs. This may seem expensive, but most decent bikes are in that price range.
So, what do I say to those who claim electric bikes are stupid and useless?
They certainly don't replace pure riding. It feels heavy and clunky and even my older mountain bike with street tires feels much more nimble and aggressive. Without the motor running, it feels a little slower than my heavier Dutch bike. If you enjoy cycling already, it won't necessarily make you enjoy it more although it is a lot fun! What it will do is allow you to ride more with less energy. Today I was able to ride to work and back as well as hitch up the dog trailer and ride to the dog park afterwords with energy to spare. I would argue that an electric bike doesn't replace riding, it replaces driving. So, if you haven't considered cycling because you don't think you can't or you don't want to get to your destination tired and drenched with sweat, you might want to go hybrid.

awwww... It even has a basket for carrying flowers.